You could tell by the crazed look in his eye, Jagger Eaton was buzzed on adrenaline after he absolutely crushed the course at Dew Tour Long Beach 2019. After it was announced that he took the top spot in the Street Quarter Final, Eaton made his way to the VIP tower in an attempt to cool down and kick back. Before he was too relaxed, though, we pulled him off to the side to empty out everything he had.

“I got this turquoise one with a red stone because it reminds me of home. It reminds me of driving through the desert, going out shooting and just doing all the stuff I love to do.” — Jagger Eaton

To little surprise, his pockets were packed with anything but lint, and everything from a stack of hundred dollar bills to a razor blade he accidentally smuggled past the guards. He even had two rings on each hand, three of which came with an interesting origin story.

“The rings are a little different,” began Eaton. “I love the Midwest, you know, because I’m from Arizona. I got this turquoise one with a red stone because it reminds me of home. It reminds me of driving through the desert, going out shooting and just doing all the stuff I love to do.”

Similar in theme but entirely different in source was the next ring on his right hand. “I got this snake in Dubai for only five bucks at a street parlor. Everybody thinks it is a Gucci ring, but I go it for five bucks.”

Then it was onto the two he wore on his left hand, which included both the least interesting origin story and possibly the most interesting. One was a simple find for only 50 cents at a Venice Beach market, but the other was skater-made and gifted to him.

“This one I got from my brother [Jett],” who is also an extraordinary skater. “One of the longtime Arizona skateboard legends, Jesse Plumb, makes these rings and they are super dope.” 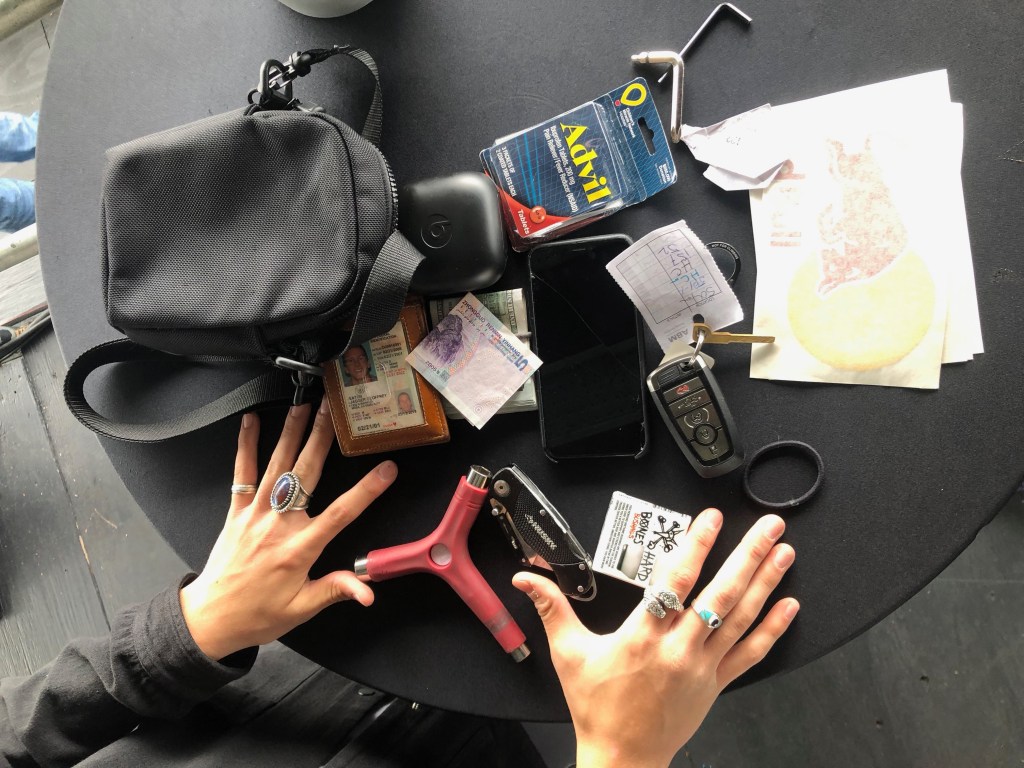 With the exception of his beat up iPhone X, everything else that Eaton had on him was tucked inside a black Neighborhood side satchel. Apparently the bag was from a store based in London called Good Hood.

“It’s a really cool online store,” explained Eaton. “I just wanted something really mellow that I could carry all my stuff in. It does the trick. It’s pretty hectic.”

Eaton’s bag was stuffed. Starting with a red Pig tool, he had everything he needed to set up a fresh board at any time. He even had a pack of Advil and a brand new set of bushings, making his skate-aid kit complete.

“I have a set of hard Bones Bushings because it is so hot here that I basically go through a set a day. Obviously I have a skate tool to put them in. On top of that I have a razor blade,” laughed Eaton. “Not really sure how I got in here with that, didn’t realize I had it.”

The list of things he had on him goes on to include a hair tie to wrangle together his thick locks, a Timberland wallet that was gifted to him by his parents, a small amount of Chinese RBM currency along with a McDonalds receipt from China, Beats by Dre bluetooth headphones and the keys to his 2018 Ford F-150 Raptor that he had just got.

In his own words, it was all, “Pretty mellow stuff.” Unlike his skating, which was definitely hectic in every sense of the word.

Maurio McCoy’s music taste is as varied as his skateboarding. From he [...]

Our friends over at B4BC (Boarding For Breast Cancer) are excited to [...]

The 2019 Dew Tour Long Beach park and street competition was the firs [...]

Brighton Zeuner just turned 16 last month but has been shaking up the [...]

In this edition of On Rotation, we spoke with the one and only Aaron [...]

Mt. Hood is Firing: Watch Some of the Top Ski and Snowboard Clips from the Glacier

Oregon is home to one of the most unique and rare locations that prov [...]