Marching toward the bowl with her Birdhouse board under one arm and a tote bag full of skate goods over the shoulder of her other, Lizzie Armanto was about to get down to business in the bowl at Dew Tour Long Beach 2019. However, just before she reached the deck, she allowed us to interrupt and talk for ten minutes while also asking her to empty out her pouch and various pockets. It appeared as if no amount of pre-skate chatting would rattle Armanto’s nerves of style.

Attached to her Birdhouse board were Independent trucks with Bones bushings and Bones wheels. In the tote bag, though, is where she had tucked away the rest of her ensemble.

From protective gear such as her black Pro-Tec helmet and 187 Killer Knee Pads, down to her classic black and white Vans Half Cab shoes to skate instead of the white Vans she was wearing on her walk up — Armanto’s tote was a total skateboard version of a rad gym bag,

“My program is still the same. The environment around me is changing [with regard to Olympic qualification], but I still have the same goals that I had before.” — Lizzie Armanto

The final items in her tote were a purple water bottle, a stickered up iPhone encased by a soft, translucent silicone tinted rose-orange and finally, a small black film camera was also in her bag. It was an Olympus Infinity Stylus.

“I usually carry a Canon, but I just ran out of film on it,” said Armanto, acknowledging the substituted tool to capture moments and expose film. “I just had this [Olympus] one handy.”

Look for Lizzie’s film photos on her Instagram stories. If you see any from this past Dew Tour, they were probably taken on that little Olympus. 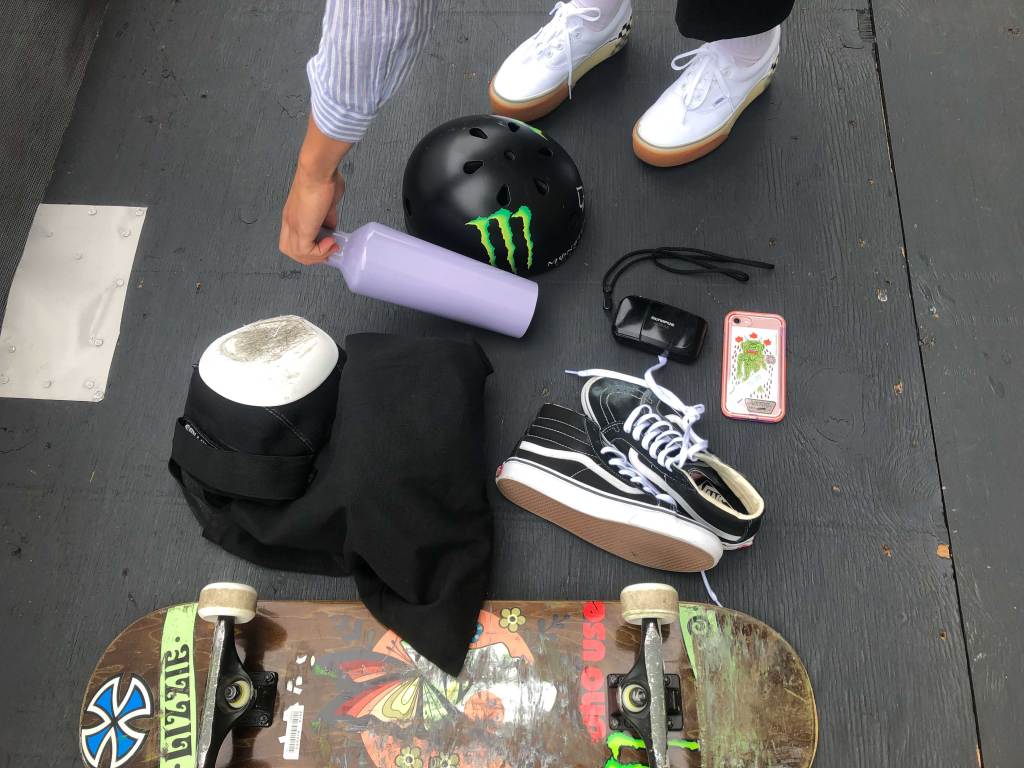 Enough about the Olympus, though. Once we ran through the goods in Armanto’s bag, we ran through some questions to see what she had on her mind. First topic, the Olympics in skateboarding.

“Now that the Olympics are coming up there is definitely a lot more support on the women’s side. A lot of the girls that weren’t getting help are getting help now,” said Armanto, starting off the conversation on a positive note. “The level of skating is also going up, for sure, which is really cool.”

People are skating way harder out here,” continued Armanto, as she spoke to the Dew Tour as an Olympic qualifier. “But, I think they would [skate hard] anyway. It is just now that they have the support it is a little bit easier.”

Emo day at the skatepark 📱 @allysha.le

“My program is still the same,” said Armanto, as she swapped shoes and strapped on her pads. “The environment around me is changing [with regard to Olympic qualification], but I still have the same goals that I had before. My goal at any contest is to do the best run possible.”

Clearly, the woman prepared to represent for the country of Finland knew exactly what she was doing with regard to skateboarding in the Olympics, and in closing, she only had positive things to say about the entire experience.

“Skateboarding is in a really cool place right now, and I think the women’s side has the most room to grow.”

In this piece of Setups, we here from one of skateboarding's most fun [...]

Welcome to our first installment of Head 2 Head. Here we look at mane [...]

Winning Results From the Dew Tour Am Series Amsterdam 2016

Snowboarding was the first of the big three board sports to make its [...]

Nine of the sickest skateboard companies competed at Dew Tour Long Be [...]