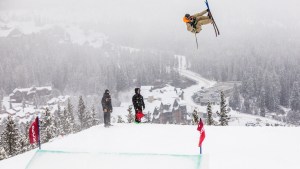 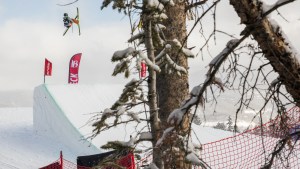 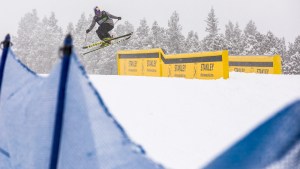 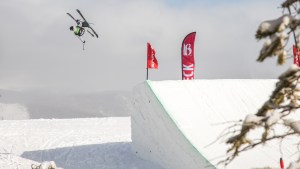 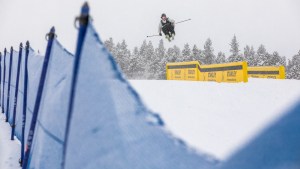 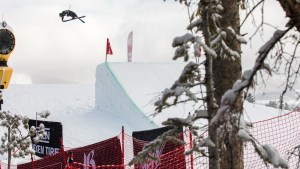 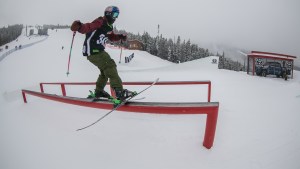 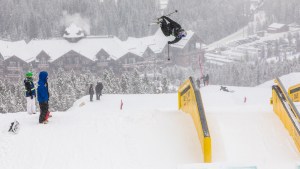 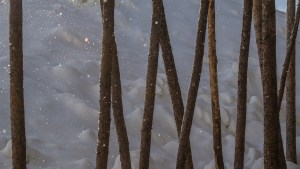 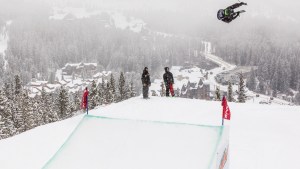 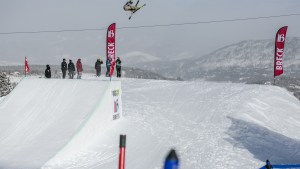 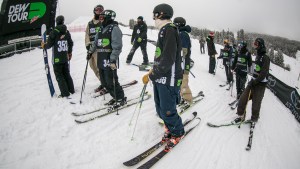 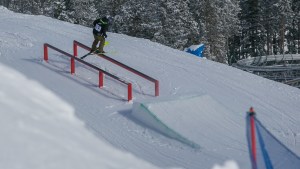 Nick Goepper took first in men’s slopestyle qualifiers this morning, putting down a clean, precise run despite unfavorable conditions. The run, which scored 90.33, was classic Goepper. He neatly and systematically mirrored each of his tricks, mixing up just the grabs to add variety: a switch right 270 pretzel 270 followed by a switch left on the first two rails, a right dub 1080 tail followed by a left dub 1080 mute on the final hits. What the run lacked in creativity, it more than made up for in execution and technicality.
Photos by Jamie Walter

Athletes dropped into a slopestyle course plagued with relentlessly changing weather this morning. A storm dropped over six inches of snow overnight and continued well into the morning, making for flat light and slow, soft conditions. Midway through the competition the storm blew off, making for better light, but a powerful wind picked up. The irregular gusts made it nearly impossible for athletes whose runs fell in time with the powerful wind to clear the final jumps of the course.

“Pretty much everyone was struggling with speed,” says Alex Hall, who moved on to finals in 11th. “Everyone made it happen, but everyone definitely had to modify their runs, nobody was really doing what they wanted to do. We definitely had to adjust.”

Evan McEachran managed to put down a clean run on his first go-round, excelling in grabs and on the rails. His run, which scored 88.33, kicked off with a switch left 450 tails on the top rail feature, followed by a backside swap 360 continuing 270. His jumps were consistent as well, with a left dub 1080 with a meter grab, a right dub 1260 safety, a switch right dub 1080 safety, and a switch left dub 1260 Japan.

In third, Colby Stevenson laid down a consistent, clean run. On a day full of crashes, missed grabs, and sketchy rails, his consistency across a range of technical hits earned him a score of 86.33.

The men’s competition stretched over three hours due to long weather and medical holds. Two athletes were evacuated from the course by medical staff during the trying morning. On the final hit, a gust caught Ryan McElman midair and he crashed into the knuckle. In the subsequent medical and weather hold, athletes were allowed to take practice runs, during which Alex Beaulieu-Marchand overshot a jump and sustained a concussion.

“Some people were fortunate enough to have fast runs and then some people who were putting down a real good run up top just got a gust at the bottom and couldn’t clear the last jump,” says Hall. “It was inconsistent, which was a bummer for those people who got unlucky.”

On their second runs, after the wind had picked up, 18 of the 27 competitors didn’t complete their runs, either crashing or skiing out of the course—including the top three finishers.

The women’s qualifiers—which were scheduled to run right after the men—were cancelled due to weather. Officials hope to host their qualifiers tomorrow, in better conditions.

Watch the finals at DewTour.com on Saturday at 12:30 PM MST.

Colby Stevenson nails one of the days many safety grabs.

Evan McCeachran threw down early in his second run, but his first score was his best.

Henrik Harlaut took the miserable conditions in stride, demonstrating once again that he has the best attitude in the game.

Bobby Brown, a legend in his own right, took 12th today, barely squeaking into finals.

The boys did a lot of waiting around today, after multiple weather and medical holds.

Oystein Braaten, who took second in slopestyle at last year’s Dew Tour, struggled to keep it tight in the challenging conditions, but moved forward to finals in 9th.

Colby Stevenson nails one of the days many safety grabs.
Evan McCeachran threw down early in his second run, but his first score was his best.
Nick Goepper took first today in classic style—almost robotic in his precision on an incredibly technical run.
James Woods elected to skip his second run after earning a qualifying score in the first—and watching fellow athletes crash repeatedly.
Henrik Harlaut took the miserable conditions in stride, demonstrating once again that he has the best attitude in the game.
Gus Kenworthy, Olympic silver medalist, placed low in tenth today—but the Telluride local hopes to podium, and qualify for the Olympics, later this weekend.
Cody Laplante slides through the lower rail garden.
Bobby Brown, a legend in his own right, took 12th today, barely squeaking into finals.
Antoine Adelisse, a rising star from France regularly topping podiums, takes a run as the weather clears.
19 year old Alex Hall, who took 11th, airs through the fog.
McRae Williams took fifth today with style and creativity.
The boys did a lot of waiting around today, after multiple weather and medical holds.
Oystein Braaten, who took second in slopestyle at last year’s Dew Tour, struggled to keep it tight in the challenging conditions, but moved forward to finals in 9th.