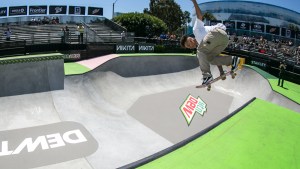 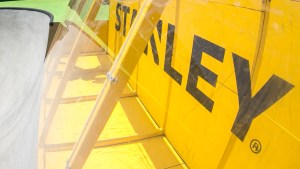 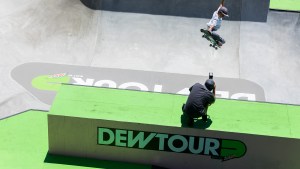 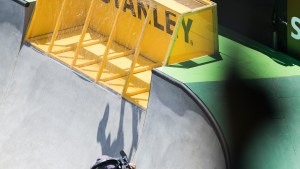 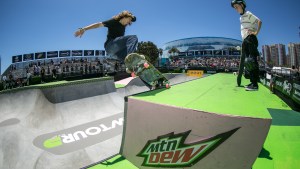 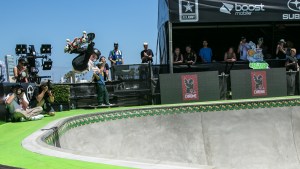 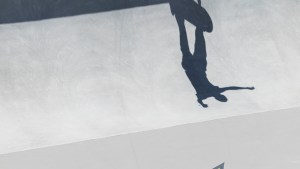 The Am Park Final made it official, 2018 Dew Tour Long Beach is underway. Fans gathered to the bleachers to see young rippers take on the brand new Dew Tour Park course, and they did  not disappoint by taking full advantage of the unique design.

Just before the first runs were underway, the young Ams—ranging from ages 11-21— were flattered to share the bowls with four skateboarding legends. Christian Hosoi, Steve Caballero, Lance Mountain and Pat Ngoho hopped in the mix with all the kids and helped kick things off in a mix of new age and classic style.

“I see all those kids all the time,” commented Christian Hosoi after the warmup session. “Being able to hang out, skate with these kids and share the course with the kids is really important. They are our future. It is about the progression of the sport, but also about keeping the core values of skateboarding intact by being examples. Protect it and respect it.”

Things quickly got underway and the freshly poured cement made for a fast opening series of runs. By the end of the first run it was the youngest competitor of the field, Gavin Bottger, an 11-year-old, that was leading the pack. Bottger was the only skater to crack into the 80s on his first run after landing a body varial 540 and kickflip indy in the deep end. He scored an 87.66.

“I was warming up with all the legends earlier, that was super fun,” said Bottger. “I definitely look up to them.”

After three more complete rounds of the ten talented young innovators on wheels, there had only been three other scores cable of cracking into the 80s but none would surpass Bottger.

Tate Carew, 13, earned second with a score of 84.33, and Liam Pace, 17, rounded out the first podium of the weekend, respectfully.

As an additional reward for winning the Am event, Bottger will go on to skate in the Pro qualifer to try his luck at Dew Tour once again.

“This park is amazing! I’m just having so much fun skating with all my homies,” spouted Bottger after he limped his way out of the park following his final run. He said it was from all the slams he took in his final three runs trying to land the cab heelflip indy in the deep end. When asked if he planned to put it down in the Pro session he answered simply, “yes” as if that question was an absolute given.

Don’t miss any of the action this weekend, and be sure to check out the complete schedule of events.

Tate Carew, 2nd, Gavin Bottger, 1st, and Liam Pace, 3rd, made up the first podium of the weekend at the 2018 Dew Tour Am Park Final.

Tyson Zane,14, finding his way up and over the hip onto the massive ramp. Photo: Durso

The 14-year-old phenom, Toby Ryan was one of only four skaters in the Am Park Final to crack 80 points. He finished 4th. Photo: Durso

Taylor Nye, 14, took a bit of a slam during one of his latter runs, but not before catching a couple kickflip stalefishes well above the lip on the largest ramp. Photo: Strand

Fighting for the win until the very last run of the event, Tate Carew, 13, finished 2nd in the Am Park Final with the help of a few behemoth bonelesses off the Stanley banked wall feature. Photo: Strand

Liam Pace, 17, launched up and locked into numerous nosegrinds during his four runs in the Am Park Final before he finished on the podium in3rd. Photo: Durso

The oldest competitor in the Am Park Final, Leandre Sanders had some trouble linking everything together but taking nosegrabs through the deep corner frontside was never an issue. Photo: Durso

All eyes on Kiko Francisco, 16, as he locks into a smith on the pool comping after launching up from the shallow end. Photo: Strand

Josh Dirksen sending it out of the deep end before smacking the crap out of the coping with this monster Madonna. Photo: Durso

Jordan Maxham leaning over to congratulate Gavin Bottger on his insane opening run in the Am Park Finals. Photo: Durso

One of the many 540s Gavin Bottger spun out of the deep end. In his winning run he stomped a body varial 540. Photo: Durso

Cedric Pabich and his shadow catching the a back smith en route to a 6th place finish in the Am Park Final. Photo: Strand